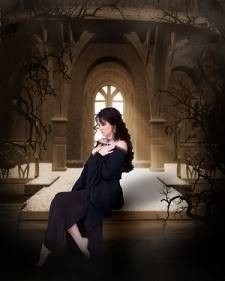 Jessica Galbreth Mythic fantasy artist Jessica Galbreth was born on April 29th, 1974 in Toledo, Ohio. Today, she makes her home and studio in Waterville, Ohio with her husband Josh and their two children. Though Jessica did study fine art with a major in painting for three years at the Toledo Museum of Art, she also considers herself largely a self-taught artist. She crafts her original works of art mostly with watercolors, pen and ink, but at times also utilizes an airbrush and acrylic for certain effects. Jessica began her art career in 1999 with a modest web site. Much to her surprise, the interest in her fantasy and fairy art seemed to increase very quickly once she showcased her art on-line, so she went on to expand her web site and product line. Now you can find Jessica’s work in numerous formats, from prints to greeting cards to calendars and books to collectible figurines and ceramics produced by leading manufacturers throughout the world. Her work is often featured at Spencers Gifts, Hot Topic and at specialty retail shops throughout the world. With distribution of her art and inspired products reaching as far as Australia, the United Kingdom and Japan, Jessica has truly become a world-renown artist. She is perhaps most celebrated for her ability to capture the haunting and often mysterious beauty of goddesses and faeries from mythology. Each of her visions brought to life on paper have a personality of their own, and often evoke strong feelings in those who view them. Some of her faeries are elegant, sweet and wistful, while others are defiant, dark and powerful.