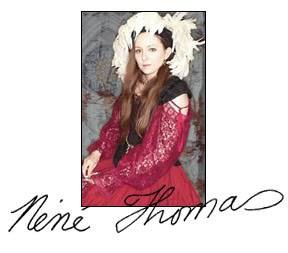 Nene Tina Thomas began her professional career in 1994, when she was approached by Wizards of the Coast to contribute work to the popular card game “Magic: the Gathering.” Her work with Wizards of the Coast can still be seen in the Fourth and Fifth Expansions, Antiquities, Legends, The Dark, Homelands and the new “Magic: The Gathering” CD ROM Game. Some of the other card games that feature her work are Shadowfist, Legend of the Five Rings, Galactic Empires, Tempest of the Gods, Wyrmwars, Gridiron, Vampire: The Eternal Struggle, Xenophiles, and Battlelords of the 23rd Century.

Although Nene is known best for her work with watercolors, she has recently begun to expand her artistic horizons with other media, including digital. But no matter what media is used, the core elements of her art remain constant: her characters have grace and elegance, her settings are striking, and the images as a whole are breathtaking. Nene’s greatest artistic ambition is to be able to perfectly capture an image that she has in her mind’s eye on paper. Over the last two years, Nene has had the good fortune to see her art translated into a verity of products, including statues, ornaments, stickers, and t-shirts. Her many products can be seen in several catalouges, in retail outlets throughout the country, or on her website. The retail success of her art hasn’t changed her focus however, and with each new piece she strives to push herself as an artist.