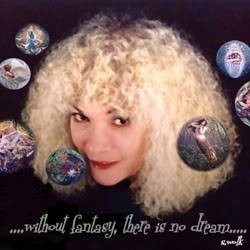 Sheila Wolk had an auspicious beginning as an art director for a pharmaceutical advertising agency and medical illustrator, honing her skills in drawing the human form. Her first pastel paintings were for the genre of sports art. In fact, Sheila became so good at capturing the human form in movement that she was named Sport Artist of the Year in 1987. American Sport Art Museum and Archives (ASAMA) gave this auspicious award to her soft-edged pastel paintings of the hard action sports. Her transition into the land of fantasy happened slowly, but once Sheila decided to change her focus the result was sensational. Sheila Wolk blends techniques to create a stirring glimpse into the magical world we live in its lore, its myths and its legends. Art has to touch you somewhere, says Wolk, explaining her new direction in art. Indeed, her art is created in a mystical realm where logic, dreams and art meet and mix to create a dreamscape of enchanting beauty and fabled majesty. She fuses traditional and non-conventional means to convey the visions, dreams and realities of a world many wish they could see outside of her paintings. Sheila combines her creative talent and imagination to accurately interpret and artistically communicate elaborate notions in an easy to understand and visually appealing fashion. And while she may be taking until the mythical world of mermaids and fairies these are not the carefree sirens or caricatures of popular culture. With Wolk’s always superb skill of depicting the human form, the mermaids and fairies seem to be of flesh and blood, yet with a pre-Raphaelite otherworldliness. At the centre of many pieces is a pensiveness that draws one deep into the psyche of a being who has seen the world as it really is and yearns for sanctuary. In these works of surface whimsicality a sense of profound reclusion and peace pervades. Deeply moved viewers have responded by once again putting the works of Sheila Wolk in great demand. The mature Wolk takes her new success in stride. I once painted sports to survive but now I paint for the survival of my soul. Wolk resides in New York City where she continues to capture the drama, intensity, power and grace that surrounds it with her pastels and lithographs. BIOGRAPHY

I was born and raised in Brewood, Staffordshire. Attained an Upper Second Class Honours in Ceramics at Stafford College of Art. I started my sculpting career at Coalport China producing mice and wildlife for resin, and Cottages and Victorian style pastille burners for bone china.

With Holland Studio Craft I began with wildlife, dogs and farm animals and then in the late eighties, after failing to get the rights to produce Lord of the Rings figures, I was given the brief: think up a fantasy range of your own, anything you like as long as it includes wizards, dragons and crystals! ah those immortal words. So, I had the idea of using the four seasons as the initial concept: one colour to represent each season, one wizard, one dragon, one crystal for each colour. That was four dragons, four wizards, four different crystals already, and I had only just started. This of course was Enchantica, and my artistic life was never to be the same again. That was nearly twenty years ago. Dragons have dominated my art ever since.

I have travelled across North America with my wizards and dragons, and of course the length and breadth of the UK. I have met many people who share my passion for fantasy, and in some cases far exceed it. I have made some good friends and strong memories. I have even appeared on live TV shopping channels on both sides of the Atlantic with my work, and taken part in major collectors events attracting thousands of eager fantasy fans.

As a freelance sculptor I have continued my career in fantasy figures. Much of my work can now be seen with The Dragonsite.com, where I have enjoyed new artistic and technical freedom, and produced pieces of a much greater complexity.

I still explore other areas of interest occasionally and have not abandoned completely my great interest in wildlife and the environment, but the boy who was addicted to Doctor Who, Ray Harryhausen films and later Hammer Horror still calls to me, and its never long before I take his hand once again and let a new fantasy adventure begin!